Go After Your Goals

The International Federation of Association Football (FIFA) estimates that more than one-quarter of a billion people around the world regularly participate in soccer. With soccer being one of the most popular sports in the world, it is important to appreciate the demands of the sport, how to improve performance, and how to reduce the risk of injury, whether you’re an athlete, the parent of an athlete, or a fan!

Soccer has a unique set of demands, including traveling between 5–7 miles in a match, 1-11% of which is sprinting! Players also laterally shuffle between 200 – 500 meters per match, and jump about 10 times per match. Athletes also make about 50 cuts each game, which involves sustained forceful contractions to maintain balance and control of the ball. Midfielders cut more often than both forwards and defenders. Therefore, strength and power are important along with endurance in top level soccer players. Power is heavily dependent on maximal strength, so the stronger an athlete is, the more powerful they are as well. A study looking at the correlation of maximal squat strength with sprint performance and vertical jump height in soccer players found that maximal squat strength determined the sprint performance in these elite soccer players. Strong correlations are evident in the 0-30m sprints as well as the 10m shuttle run test that involves a sharp change of direction which tests balance, strength, flexibility, breaking, and acceleration, and jumping height. The players with a high level of strength had used a training regimen with fewer repetitions, high loads, and emphasis maximizing force during the second half of the squat. The study also found that high squat strength performance does not imply a lower level of aerobic capacity in elite soccer players. Another study found that bilateral exercises such as the squat demonstrated better improvements in change of direction performance (i.e. cutting) than unilateral exercises such as the step up. 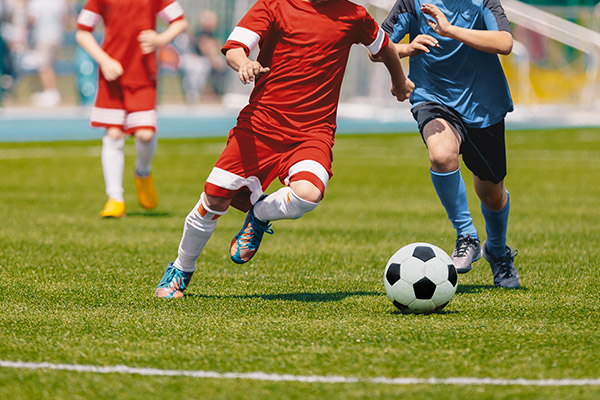 A proper warm up and injury prevention program is vital for soccer players! The FIFA 11+ is an injury-prevention program which has been specifically designed to prevent soccer injuries. The program takes twenty minutes to complete and is designed to be performed twice a week. No specific equipment is needed. The FIFA 11+ prevention program was shown to have substantial injury preventing effect by reducing soccer injuries by 39%. The program reduced the top four most prevalent soccer injuries: hamstring, hip/groin, knee, and ankle injury by 60%, 41%, 48%, and 32% respectively. Several studies have shown improvements in quadriceps and hamstring muscle strength, as well as balance, agility and running speed compared to groups with no warm up program.

Both strength and power are important factors in successful soccer performance because of the demands of the game. Both should be consistently worked on within a weekly schedule using few reps (no more than 5) with high loads and high speed in order to improve sprinting, cutting, and jumping performance. Physiological and performance improvements from the FIFA11+ program were obtained from studies where soccer players performed the program 2-3 times per week for 8-12 weeks. Take home message: Soccer players need to make sure they are doing a proper warm up and maintaining strength training throughout the season to improve performance and prevent injury. Contact PTI today to talk to our athletic trainers about taking your game to the next level!